YMCA 7th Grade Initiative Changes One Life at a Time 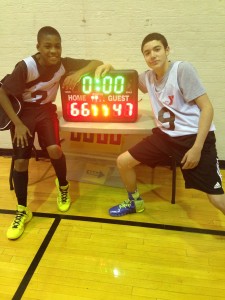 Through its 7th Grade Initiative, the YMCA provides membership to interested 7th graders for a year. It’s a chance for 7th graders to benefit from YMCA programming at a critical time in a young person’s life.

Thomas Galuppo, Director of Healthy Living at the Gateway Family YMCA Five Points Branch in Union, NJ, recently shared a story about the impact of the 7th Grade Initiative on the life of one young man.

Galuppo met 7th grader Kenny Noncent, when he visited Kawameeh Middle School to talk about the 7th Grade Initiative. After the talk, Kenny came to the Y with his mother and enrolled in the program. His mother said she wanted Kenny to get out more and not just sit around the house. It worked — Kenny became a very familiar face at The Five Points Branch.

Kenny grew to love basketball and would shoot nonstop. Through the Y’s Teen Basketball Skills and Drills class, Kenny improved his skills and prepared to try out for his middle school team. The YMCA coaches took Kenny under their wing because of his passion and potential.

Kenny practiced countless hours up until the day of his first tryout. But at tryouts, he missed the cut and did not make his school team. It was frustrating for Kenny to not achieve the results he hoped for after working so hard.

As it turned out, there was a Y team in need of Kenny’s skills. Galuppo was building Gateway’s first ever Youth Basketball Association (YBA) basketball team to compete in the YMCA league, and he needed of one more player. Kenny filled the final spot.

Kenny became one of the leading scorers throughout the season. He gained more and more confidence on and off the court. The team made it all the way to the Final four in the March Madness YBA Tournament at the Wyckoff YMCA.

Fast forward one year: Kenny is now a starter on his middle school team. Galuppo believes that without the 7th Grade Initiative Kenny would not be where he is today. “I feel that just walking through the YMCA’s doors changed his life and was able to propel him to become a better basketball player as well as overall person,” said Galuppo. “The 7th Grade Initiative gives kids a chance to better themselves here at the YMCA and Kenny took full advantage of it.”