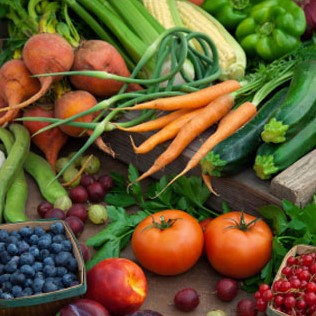 Live Healthy Vineland (LHV) launched a farm-to-pantry pilot initiative that provided 312 families with fresh vegetables in 2016. This effort, along with others implemented through LHV’s Healthy Food Network, has made a positive impact at the dinner table in many Vineland homes.

One beneficiary revealed that she had not had fresh produce in nine years. For another family, this was the first time the children had ever tasted fresh vegetables. This inability to procure fresh produce is not unusual in Vineland where over 40% of the children under age 11 are overweight or obese. Ninety percent of children in Vineland do not meet recommendations for vegetable consumption, and 27% of children eat vegetables less than once per day.

The lack of fresh produce prompted Emma Lopez, Health Educator for the Vineland Health Department to help LHV conduct a needs assessment. During the winter of 2016, LHV surveyed food pantries to learn about the variety of available foods and the desire to expand provisions to residents needing assistance. Seven pantries and one soup kitchen were recruited to participate in the pilot program. With the help of Mayor Ruben Bermudez, four farms—Flaim Farms, Ploch Farms, Muzzarelli Farms and Pontano Farms—committed to donating fresh fruits and vegetables.

Over one ton of fresh fruits and vegetables were donated to local food pantries throughout the growing season. Donations included cucumbers, peppers, kale, zucchini, green beans, dandelion, kale, corn, beets, radishes, and watermelon. Recipe cards accompanied the produce to provide families with tips on how to prepare meals using the ingredients.

The need for refrigeration and means for transporting the produce from the farms to the pantries were two lessons learned from the pilot program according to Lopez and David Calderetti, New Jersey Partnership for Healthy Kids-Vineland Project Manager. “Farms and pantries are not necessarily equipped with the means to pick up and deliver. Also, the produce doesn’t grow on a schedule; it’s ready when it’s ready, so a way to refrigerate fresh produce is critical,” Lopez said.

Calderetti also expects to expand consumer education around the use of the various fruits and vegetables. “Providing recipe cards were the first step, but we want to offer more education going forward,” said Calderetti.

“Our goal is sustainability,” Lopez said. While the first year was only a pilot, strides made proved that the necessity to grow and continue the effort is well worth the time it takes to coordinate logistics. “What was once a dream is fast becoming a reality,” said Lopez. “We have a Food Access Committee in place, and we all are looking forward to 2017.”