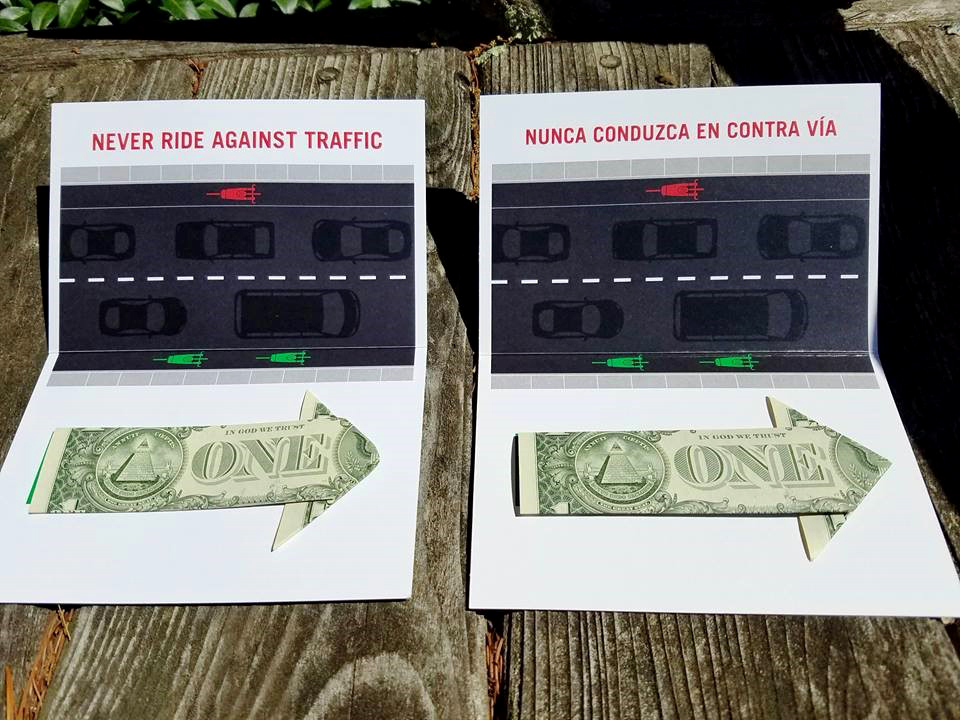 If you were out and about in Trenton on May 19, you might have noticed someone intercepting bicyclists to provide unique safety cards in honor of Bike to Work Day. The “someone” was Jay Watson, Vice President of D&R Greenway Land Trust. Each card Watson handed out contained a one dollar bill folded into a directional arrow to get bicyclists riding RIGHT! “I wanted to develop a way to approach riders to change the way they rode their bicycles in the city,” said Watson. “I wanted them to ride safely.”

The bicyclist intercepts during Bike to Work Week was the first roll out of the safety cards. Watson’s primary goal is to get everyone riding on the right side of the road. Motorists tend to scan for traffic following the rules for cars, so bicyclists need to be seen in that traffic.
Including a dollar bill in the card gave him a reason to approach the riders and communicate that riding “right” is so important that someone is willing to pay them for it. The safety cards also contained standard safety information like “wear a helmet” and “obey standard traffic laws that apply to the motorist.”

Watson credits Wills Kinsley of Trenton Cycling Revolution and Marissa Davis of the New Jersey Partnership for Healthy Kids—Trenton for helping him improve the cards.

Most contacts on Ride to Work Day was with adults. “We are hoping to contact more kids this summer on weekend intercepts and while school is on recess, during the week. We will also deploy volunteers at various public places and events, including the Greenwood Avenue Farmers Market, Capital City Farm, Art All Night and other gatherings of people where we would expect young bicyclists,” Watson said.

Overall, bike commuting has grown by 62% from 2000 to 2013, according to the League of American Bicyclists which sponsors and promotes Bike to Work Week and Bike to Work Day.

Trenton has remarkable opportunity to be a real bicycle-friendly city. “I want people to notice how many bicycles are on Trenton’s streets on any given day,” said Watson. “Existing off-road trails like the D&R Canal Path are remarkable opportunities to get bicyclists around the city and get others out of their cars and onto bikes.”

D&R Greenway Land Trust is working through a William Penn Foundation Grant to connect the D&R Canal Path at Trenton’s Battle Monument to the unconnected, isolated section of the Canal Path in South Trenton. “Once we bridge that gap, you can continue directly into Bordentown and to the proposed Delaware River Heritage Trail,” said Watson. All of this is a part of the Circuit Trails initiative which plans over 700 miles of trails in the Greater Philadelphia, as well as Central and South Jersey region.