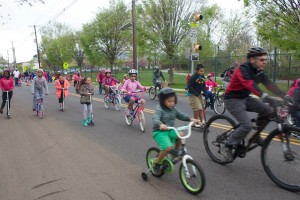 When 4,000+ residents took to the streets during the first New Brunswick Ciclovia on October 6, 2013 they likely did not realize that opening a seven-mile loop of city streets to meet neighbors, bike, skateboard, dance, enjoy music, and play took nine months of concerted planning and organizing on the part of a diverse partnership of committed leaders representing 30 community organizations and the city of New Brunswick.

What was learned from New Brunswick’s successful first Ciclovia was incorporated into the planning for Ciclovia events scheduled throughout 2014, and also provided a framework for other cities and towns that want to give their streets back to the residents for physical activities and promote social cohesion and integration.

The first of three 2014 Ciclovia’s took place on May 4th, with even more participants than the initial one. “We also expanded to 12 activity stations throughout the route and greater and more sponsorship support,” stated Jaymie Santiago, project manager of New Jersey Partnership for Healthy Kids-New Brunswick, who has been involved with Ciclovia from the start. The remaining year events are scheduled for July 12 and October 12, 2014.

“Our success in New Brunswick combined with our extensive work evaluating Ciclovia has provided valuable insight and best practices for how to organize and promote open streets in a community.Part of our strategic framework for Ciclovia is to share what we’ve learned and help other communities realize the same benefits.”

Cicolvia is an international phenomenon that began in Bogotá, Columbia in the 1980s and has spread to countries as diverse as Australia, Ecuador, Canada, Israel and Argentina. Santiago traveled to Guadalajara, Mexico to observe and learn from that city’s Ciclovia in January, in preparation for his involvement in the Open Streets National Summit in Los Angeles this past April.

“In New Brunswick, Ciclovia took root thanks to participants of the New Brunswick Tomorrow (NBT) sponsored program, Leadership Tomorrow in 2012,” Santiago explained. “Their focus was on addressing some of the needs in distressed neighborhoods.” The Ciclovia concept came from their review of the 2012 Eagleton survey conducted in New Brunswick.

“By including representatives from different communities and organizations focusing on various aspects of the community, the committees were able to bring the diverse needs of the community residents into the planning process,” Santiago explained

New Jersey Partnership for Healthy Kids-New Brunswick underwrote the costs associated with the logo, graphic arts materials, the website and other promotional materials for New Brunswick’s Ciclovia. Also, the NJPHK-NB guided the initiative at the onset, establishing an infrastructure that supported the working committees.

The goals of New Brunswick Tomorrow, as part of Ciclovia are: 1) to develop and coordinate a comprehensive outreach strategy with a focus on sustaining the effort beyond the first scheduled Ciclovia; and, 2) to create a community outreach infrastructure that will assist in meeting the desired goals of fostering a culture of health, wellness and active living in the city of New Brunswick.

Through the support and vision of Mayor James Cahill, the New Brunswick Ciclovia Advisory Committee views this initiative as part of the city’s ongoing efforts to improve the health and wellness for all New Brunswick residents. Moreover, the mayor’s expressed goal is to host the remaining two Ciclovias for 2014 and monthly Ciclovias thereafter. “Through our community partners, we envision Ciclovia to be part of the fabric of the city where a culture of health and wellness is created. Ultimately, Ciclovia not only assists city residents to lead active, healthier lifestyles, but also strengthens community pride,” Santiago said.