Soccer Academy A Win-Win for Children and New Brunswick Community 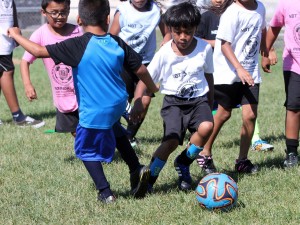 Youth Coach Captain Mike Bobadilla doesn’t hold back in expressing his passion about the Soccer Academy he leads in New Brunswick. Back in 2000, a friend asked him to assist him with a summer youth soccer team and, since that time, it’s been a major part of his DNA. The program started with 30 kids a few times a week in Archibald Park. By the end of the season, the program had grown to nearly 100 kids. Unfortunately, due to lack of funding and resources, the program was discontinued.

“In the back of my mind, I knew how vital the program had been in keeping kids off the street and decided to create a summer academy in 2008,” said Captain Bobadilla, who worked on the local police department’s night shift. Called the Bobadilla Soccer Academy, 125 kids were initially recruited for a six-week summer soccer program at Roosevelt School and the program grew to nearly 300 kids by 2010.

After a two year hiatus, Bobadilla once again relaunched the Academy in 2014 with 125 kids and expanded it to include eight school-based counselors, workshops and summer employment for neighborhood teens. Last summer, more than 135 kids participated in program and he expects that number to increase in 2016. During the six-week program, the day consists of reading and personal development workshops and morning and afternoon soccer games at the local high school. The children also get involved in community service projects such as neighborhood litter clean up and recycling.

At the end of the program, each child receives books read over the summer and a trophy. “The trophies serve as an acknowledgement of their hard work and dedication,” said Bobadilla.   “Everyone needs to feel loved and a sense of belonging.”

New Brunswick Tomorrow (NBT), a co-director of the New Jersey Partnership for Healthy Kids-New Brunswick, was recently awarded one of 24 grants from the U.S. Soccer Foundation to support the Bobadilla Soccer Academy’s 2016 season. “We’re excited to support the Bobadilla Soccer Academy,” said Jaymie Santiago, vice president of NBT. “Through sports-based youth development, it’s great to provide the children of New Brunswick with a structured environment that instills self-discipline, and encourages a healthy and active lifestyle.”

To raise additional funds for the Soccer Academy, Captain Bobadilla solicits team sponsorships from local businesses and police officers. “Through grants, and the generous funding from our local businesses police officers, we were able to purchase jerseys, cleats, shin guards and soccer balls for 18 teams last year,” said Bobadilla.   Fellow police officers, as well as church members also lend a helping hand during the academy. In addition, 22 high school kids were recruited as junior counselors and received a stipend at the end of the summer.

“The academy is truly a team effort and a win-win for New Brunswick kids,” said Bobadilla. ‘It promotes health and wellbeing, provides a safe haven for kids to play and offers a positive experience and interaction with our police officers. Without the generous support of my police director, Anthony Caputo, the New Brunswick Mayor’s Office and organizations such as PRAB, RWJ Hospital and NBT, the Bobadilla Summer Academy would not be possible.”