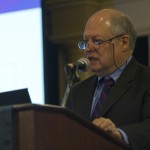 Citing findings from the report “F as in Fat: How Obesity Threatens America’s Future 2013,” James Marks, MD, MPH, senior vice president and director of the Robert Wood Johnson Foundation’s Health Group, stated that the average adult today weighs 24 pounds more than in the 1960s, and that the heaviest state’s obesity rate 30 years ago was lower than the least-obese state’s rate today.

“While childhood obesity continues to climb in the U.S., the cost of fruits and vegetables have also risen, and the cost of carbonated beverages has declined,” said Marks.  “But in the midst of this, growing public interest has led to action and signs of progress.”

Marks noted that the United States Department of Agriculture has adjusted standards for foods and drinks sold in schools, placing limits on calories, fat, sugar and sodium in school vending machines, cafeterias, and stores.  And that cities and schools – with help from organizations like the National League of Cities, and the Alliance for a Healthier Generation’s Healthy Schools Program – are changing policies and practices to promote healthy food and physical activity.

Industry is also making a difference, as noted by the Alliance for a Healthier Generation’s successful recent efforts to work with beverage companies to establish guidelines for beverages sold in schools, resulting in a significant decrease in the number of beverage calories shipped to schools. In addition, a 2011 report from the Hudson Institute, “Better-For-You-Foods: It’s Just Good Business,” found that food and beverage companies with a higher percentage of their sales coming from better-for-you products performed better financially, reporting superior sales growth, operating profits, stock performance, and higher reputational ratings.  “These results alone indicate that good business can be about healthier companies and a healthier nation,” said Marks.

According to Marks, fast-food and casual dining restaurants are also seeing market value in providing healthier options, noting that chains growing their lower-calorie food servings have recorded increases in overall food servings.  He called out a recent announcement from McDonald’s, that the chain would promote and market only water, milk and juice with Happy Meals.

Through catalyzing public demand for healthy places and practices, Marks hopes that the future will bring further engagement and public dialogue, wherein all those with responsibility and authority will consider health in the decisions they make.