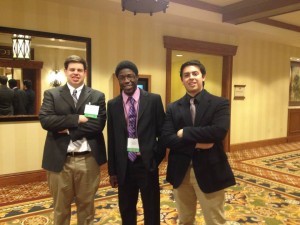 The YMCA Model UN program introduces students to the operation and structure of the UN while providing them with an opportunity to actively learn about world cultures and debate issues of international importance. The program promotes leadership through character development, while introducing students to a vast array of ideas.  “The YMCA Model UN program is distinct because students lead the committees,” stated Curtis Myers, director of the Model UN student program and Civic Engagement for the YMCA of Burlington/Camden Counties. “Our program focuses on compromise, finding solutions, and student development to achieve our goal of “developing tomorrow’s global leaders, today,” said Myers who also serves as executive director of Camden County Expansion.

The intent of the program is also to provide high school students with the opportunity to simulate the debate and problem solving that occurs at the UN in an atmosphere that promotes respect for people of differing views. Students represent several UN member countries, develop resolutions intended to address world problems and debate them.

New Jersey Partnership for Healthy Kids deputy director, Darrin Anderson served as one of the guest speakers and provided the students with an overview of how public policy shapes the environment and the importance of creating equitable communities. “Similar to the issues the students address in third world countries, it’s important for them to understand that many of the same inequities also exist in the U.S.,” said Anderson. “I also believe it would be good to have greater representation of students from underrepresented and underserved communities; it’s good for us to advocate for issues that are not our own, but it’s empowering to get people to advocate for themselves.”