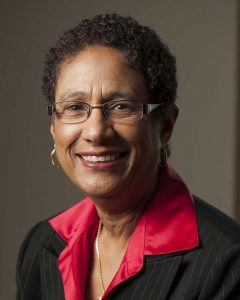 Dr. Denise Rodgers believes that “zip code is more important than genetic code” when it comes to individuals’ health outcomes. Since graduating from medical school, Rodgers has been immersed in the health of people who live in the overlooked and underserved zip codes within a city. In a career that combines community health and academia, she has attended patients and taught student health professionals in the Bronx Borough of New York City, in San Francisco, in New Brunswick and most recently in Newark.

Her credo is to always serve the best interest of the patient. This guidance came from her mentor, Dr. Marilyn Gaston, the second African American woman to achieve the position of Assistant Surgeon General and rank of Rear Admiral in the US Public Health Service. “Marilyn advised that if I make a decision that is in each patient’s best interest, 90 percent of the time it will be the right decision. In all the roles in my career I have emphasized that it is the patient who is most important.”

As Vice Chancellor for Interprofessional Programs at Rutgers University Biomedical and Health Sciences, Rodgers facilitates the development of educational initiatives that teach students how to work together most effectively on teams that integrate various areas of healthcare. “We want to train the people who will do the very best job they can for the patients they serve,” said Rodgers.

She continues to work to improve the health of people living in cities as a co-director of the Believe in a Healthy Newark Initiative that is aimed at creating a sustained culture of health in Newark. The initiative is funded by a Robert Wood Johnson (RWJ) Foundation, grant from New Jersey Health Initiatives. She also chairs the board of directors for the Healthy Greater Newark Medicaid ACO, and recently spent six months “on loan” overseeing the Newark Department of Health and Community Wellness.

Rodgers grew up in Flint, Michigan. Her parents were in “helping professions.” Her father was a psychologist; her mother was a nurse—the first African American school nurse in Flint. “For as long as I could remember, I wanted to be a doctor,” Rodgers said.

Along with her parents, a television doctor influenced her career direction. “I remember watching ‘Marcus Welby’ and it occurred to me that being a family doctor intuitively made sense. If I’m taking care of all generations in a family, I have a greater ability to influence the overall health of that family.”

She went to Michigan State University College of Human Medicine. “When I started medical school, my plan was to practice in a black community in the rural south as a way to give back. Then during my fourth year, I did a rotation at Montefiore Medical Center in the Bronx. This was my first time in a big city and loved it. Experiencing an urban environment transformed my trajectory.” She did a residency in the family medicine track of the residency program in social medicine at Montefiore. She had a National Health Services Corps (NHSC) scholarship which required another two years of working in the same Bronx clinic where she had trained.

One of her more impactful experiences was working with Cambodian and Vietnamese refugees. “We saw very high lead levels in the kids who were living in tenements with lead paint. I partnered with a community organizer to educate families about cleaning their homes to reduce exposure to lead. We also advised them to call a rent strike to force landlords to remediate the lead paint.”

After five years in the Bronx, Rodgers took a position at the University of California, San Francisco (UCSF) in the family medicine residency program at San Francisco General, a public hospital. She eventually became Residency Director and continued her focus on care for indigent populations. Her career also was shaped by working in San Francisco during the height of the HIV/AIDS epidemic.

Rodgers came back to the East Coast when UMDNJ-Robert Wood Johnson Medical School dangled a compelling job offer: Senior Associate Dean for Community Health. She also wanted to be closer to her parents who by then lived in Baltimore.

“My new position allowed me to put into place the things I had been teaching residents and students—how to work most effectively with communities to improve health and form partnerships,” said Rodgers. Based in New Brunswick, I had support from RWJ Hospital, UMDNJ-RWJ Medical School, Rutgers University, Johnson & Johnson, St Peters Hospital and key community-based organizations to carry out initiatives related to community health and population health.

In 2005, Rodgers became Chief of Staff at the University of Medicine & Dentistry of New Jersey (UMDNJ) and later became Executive Vice President for Academic and Clinical Affairs with oversight for all academic and clinical activities. Eventually she became the last president of UMDNJ and was very involved in the merger with Rutgers.

Now, as director of the Rutgers Urban Health and Wellness Institute she is the back to early roots of working to improve the health status of people living in the city.

“About 20 percent of individuals’ health and well-being relates to the care they receive from health professionals; 40 percent is based on social determinants—where they live, where they work and what they earn, their education and exposure to violence and other environmental risks—all the variables that influence overall quality of life also have a huge impact on health outcomes. It always comes down to the need to look broadly and holistically at how to make a significant difference in improving patient health outcomes,” Rodgers said.

Given her career experiences and the potential of her positions, it is clear that Dr. Denise Rodgers has made, and will continue to make, substantial contributions to patients, to students and faculty, and to the community of Newark.