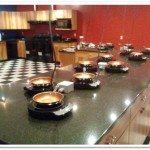 Vicky Williams, senior program director of the Frost Valley YMCA Camp, conferred with NJPHK Deputy Director Darrin Anderson when Frost Valley was seeking –and later won — a $50,000 grant from the National Recreation Foundation. The grant enabled Frost Valley to pilot a wellness initiative, focused on nutrition and physical activity, at its camp in the Catskill Mountains of New York.

Shannon O’Connor, food access coordinator at NJPHK-Trenton, took a sabbatical from NJPHK to spend three months at Frost Valley. She implemented the wellness summer curriculum and helped the YMCA transition into its fall education program by training instructors to run healthy cooking classes.

The program went so well that Frost Valley received a two-year grant, with 75 percent more funding, to expand the pilot and fully integrate wellness into camp activities year-round.

O’Connor said her work at Frost Valley was an “opportunity to put into play the work our partners have been doing in Trenton. We wanted to show campers how they could carry their healthy experience at camp back home and keep eating healthy foods and being active.”

Nutrition education and diabetes prevention was the focus of program. Frost Valley built a full teaching kitchen with 15 stations equipped with home cooking; type stoves and equipment, not an industrial kitchen. “It was important that the kids learn to cook in a kitchen that looked like their house or apartment. It helped them feel at home and comfortable,” said O’Connor.

“By making food prep fun, kids acquire living skills that will stay with them after camp. We want the kids to bring these easy, quick-to-make, nutritious meals home to begin living a healthier life,” said O’Connor.

The camp held six classes each day, and added eight evening programs because interest was so high. Each class could accommodate up to 20 campers. The oldest boys did an Iron Chef healthy cook-off challenge. Wellness was incorporated across camp activities. For example, the theater stage craft team came to the kitchen to construct healthy gingerbread houses out of matzo crackers and fruit.

An Adventure Village Challenge was the prime physical activity. O’Connor and five teens did a four-day hike in the backwoods. All other campers were challenged to match that with a physical feat of their own. “The kids did everything from a 15-minute walk to jogging up the mountain in record time. Over 200 staff and campers took part in the challenges,” said O’Connor.

“Everything I helped to do at Frost Valley was based on our NJPHK strategy,” said O’Connor. Frost Valley is now creating a curriculum guide based on the summer pilot and presenting it at YMCA conferences to incorporate into other Y programs. “It’s great to know that the NJPHK strategy will influence healthy lives at home and at camps for children and their families well beyond the reach of our Trenton community.”