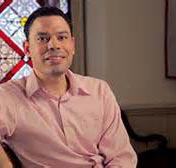 He has been working with and for New Brunswick’s communities and their residents for the past 12 years.

Santiago has a Master of Public Affairs and Policy from Rutgers. He was drawn to issues of food security while working with NJ SNAP-Ed (Supplemental Nutrition Assistance Program). “Being young and enthusiastic and wanting to teach, I landed in the field of nutrition education, facilitating classes to underserved populations,” he says. “When I learned the stories of why a person eats unhealthily or overeats, I saw the need went beyond nutrition education. For some, it was about the inability to afford healthy food, while others experienced issues around obesity and overeating because it was their way of coping with domestic violence at home. So, there’s a theme of wellness outside the sphere of nutrition and that drew me to looking at issues through a larger lens, such as food systems and how communities become healthy.”

He joined Rutgers Cooperative Extension and was instrumental in creating a collaborative of community gardens in the city. He also was on the initial planning committee that developed the New Brunswick Community Food Alliance. He helped to structure that effort at its genesis: “at a point,” he says, “when people were beginning to talk about food systems, how they interact and how they can be sustained to address the issues of hunger in community.” He also served as co-director of Rutgers Against Hunger, a university-wide initiative focused on offering temporary relief to families dealing with issues of hunger across New Jersey.

In 2012, he came to New Brunswick Tomorrow as director of operations. His work broadened beyond health and food security to include issues that affected neighborhoods and initiatives that aimed to engage more youths. In 2013, he became the project manager for NJPHK-NB.

“The NJPHK considers the physical environment as a way to effect the health of the community. We ask ‘why isn’t it easy to make the healthy choice?’ and then focus on the systemic issues and policies in place that impede a healthy lifestyle.”

Reflecting on recent career highlights, Santiago says, “It’s hard to trump Ciclovia.” This New Brunswick-wide initiative gives residents a one-day holiday from vehicular traffic so they can take back the streets to bike, walk, play games and sports. He is excited by the momentum of Ciclovia and sees it as a “centerpiece for living well and healthy in New Brunswick.” Santiago was a key player in bringing the first Ciclovia to New Brunswick in 2013. Now, he is a recognized authority and provides guidance to other communities wanting to inaugurate Ciclovia.

Looking ahead, Santiago has a full agenda for 2015 and beyond. He anticipates that NJPHK-NB’s work with five houses of worship to draft and adopt wellness policies will serve as a first step in creating a Culture of Health throughout the New Brunswick communities. He hopes to expand this effort to include over 60 houses of worship in time. He also is consulting with schools, day care providers and Head Start to help them adopt HEPA (healthy eating & physical activity) standards. As director of Healthier New Brunswick — a collective of healthcare providers — he is working to unify the work and voice of healthcare services in the community.

He may have grown up in Perth Amboy, but Santiago is rooted in New Brunswick now. It’s where his home and his family is, and he’s helping to make New Brunswick a healthier community for all the families who live and work here.