TRENTON — In Trenton’s South Ward, the average resident lives until 73. But in West Windsor, about 12 miles away, residents could expect to live up to 14 years longer, according to a new study released Tuesday.

Researchers from Virginia Commonwealth University and the Robert Wood Johnson Foundation released life expectancy calculations for Mercer County as part of a larger series whose aim is to raise public awareness and spur action.

“You can see pretty stark differences in life expectancy even in places that are relatively close to one another,” said Matthew Trujillo, a research associate with RWJF.

The study notes that a complex web of factors impact the disparities that exist, including poverty, environmental factors and access to education, jobs, affordable housing, nutritious food, places for physical activity, health care and social services.

“I think what we have done for quite some time is try to address things like life expectancy through the healthcare system alone and we’ve come to the realization that we may not be making the progress that we would like to be making,” Trujillo said. “To help us make that progress, it would require us to think about some of these other factors that we might want to address.” 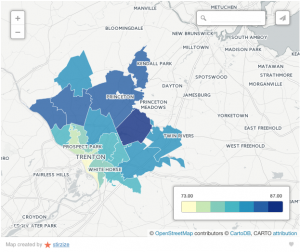 Gregory Paulson, executive director of the Trenton Health Team, said the team has made strides in improving the city’s health outcomes, in large part because of its partnerships with more than 60 groups.

Among the initiatives he highlighted were the Faith in Prevention program, which has worked with 30 faith-based organizations to encourage healthier eating choices and physical activity, and a trauma-informed care program, which targets individuals who suffer lasting adverse health effects stemming from childhood trauma.

Earlier this year, the team received two multi-year grants: one from Novo Nordisk to educate parents and promote physical activity and healthy food choices for elementary school kids and another from Trinity Health System aimed at improving the health and wellbeing of city residents.

“I think while the map shows the disparity exists, Trenton is uniquely positioned to be able to make improvements here in the community,” Paulson said.

Marty Johnson, president and CEO of Isles, said that improving the quality of life can help rein in the ever-growing healthcare costs.

“The public is paying for it one way or another,” he said. “We might as well pay to solve the problem upstream than wait until the symptoms come and have foundations like RWJ pay for more healthcare services. It’s really expensive to do it that way.”

Isles, whose mission is to foster self-reliant families and build healthier communities, has focused its efforts on building 70-plus community and school gardens around the city; removing lead hazards in older homes to help reduce lead poisoning risks in children; and providing dropout students with academic success, life skills and job readiness training, which often helps them become change agents in some of the city’s most dangerous neighborhoods.

“Our mission isn’t to build homes or grow food or train young people,” Johnson said. “Those are some of the things that we do only because we found them to be the most powerful way to get that outcome.”

Isles is also a vendor at the Greenwood Avenue Farmers Market, which is now in its second year of providing fresh, healthy produce to residents who might not have otherwise had access to it.

Sam Frisby, CEO of the Trenton YMCA and a county freeholder, acknowledged the many barriers to eating better — access to fresh produce, the cost of fresh produce and knowing how to cook fresh ingredients. But the farmers market saw these obstacles as opportunities to fill a void.

“When you know better, you do better but only if you have access,” he said. “It’s not only about having access, but it’s also about educating people. … We’ve got to make sure they understand what they are and how to use them.”

The market, which is open 2 to 6 p.m. every Monday through Oct. 24, also offers health screenings and health care referrals, exercise classes and summer meals for students who qualify for free and reduced-price lunch when school is in session.

“It’s really about creating a culture of health,” Frisby said. “We’ve got to be able to do more of this and get it to a greater scale.”

Johnson cautioned that other towns in Mercer County are not immune to the problems that have plagued Trenton. Over the last decade, regional trends have begun to change as poverty has increasingly moved to the suburbs.

“It’s really important that we understand the spatial relationship between illnesses and quality of life,” he said. “When you start to see those regional trends, this isn’t just a Trenton problem; and therefore, we have to rethink the way we solve these problems.”