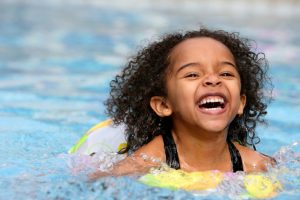 According to the CDC, accidental drownings are a leading cause of death for children ages one to 14. Most YMCAs offer swimming lessons for young kids to teach the importance of water safety and the sport’s health benefits. In late 2015, the Raritan Valley YMCA was able to help more than 40 kids get their feet wet through a grant from the USA Swimming Foundation.

In addition to physical health benefits, learning to swim at a young age is being linked to reaching developmental milestones more quickly than average, according to a study conducted at Griffith University on Science Daily’s website. The study surveyed parents of nearly 7,000 children under five years old from Australia, New Zealand, and the US over a three-year period. Professor Robyn Jorgensen, the lead researcher on the study, found that children who participate in early-years swimming achieve a broad range of skills sooner than the average population. According to Jorgensen, “Many of these skills help young children to transition more quickly into formal learning contexts such as pre-school or school.” Motor skills, oral expressions, and mathematics were other areas that showed a gap between kids who could swim and those who couldn’t.