Ciclovia Takes to the Streets 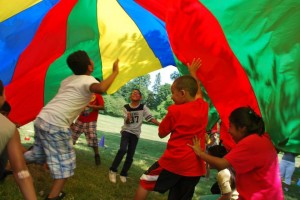 Over 4,000 people took advantage of New Brunswick’s open streets on Sunday, October 12. They biked, walked, played ball, talked with friends, skated and climbed a rock wall, among other activities.

During Ciclovia, cars are banished; streets are closed to motor traffic but open to fun, games, movement and fellowship. The New Brunswick Ciclovia area is a 3.4 mile route—6.8 miles round trip.

This was the third Ciclovia since October 2013, and the response from the community was universally positive, guaranteeing that Ciclovia will become a New Brunswick mainstay.

The October Ciclovia saw a slightly altered route, more activity stations, including a bike rodeo and bike exchange, and greater engagement from community organizations. These enhancements resulted in more smiles than ever before, according to Jaymie Santiago, project manager of New Jersey Partnership for Healthy Kids-New Brunswick. Santiago has been involved in the planning and execution of Ciclovia in New Brunswick since the inaugural event in 2013.

Following the first Ciclovia, the partners conducted a comprehensive evaluation which revealed that Ciclovia effectively increased the health and wellness of attendees on the day of the event. Those that responded to the survey reported participating in physical activity longer at Ciclovia than when they normally exercised.

No doubt that activity will continue as New Brunswick plans to continue hosting Ciclovia into 2015 and beyond.