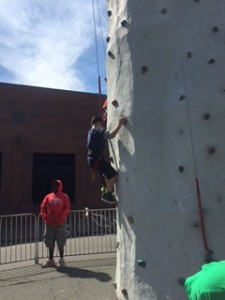 Once again thousands of New Brunswick residents took to the streets for the Ciclovia event held on Sunday, April 19th. The free, citywide initiative closed the streets to cars and opened them to people to promote healthy active living, with more than 15 activity stations on a three-mile route.

The event was sponsored by New Brunswick Tomorrow, the City of New Brunswick, Johnson & Johnson and Rutgers University. Volunteers from more than two dozen other community organizations, including NJPHK-New Brunswick also participated.

As part of the event, residents could walk, run, bike or skateboard in the streets. There was also a pop-up skate park, a rock climbing wall, a Fun Bus, a bike rodeo, music and art activities, and group fitness classes, including yoga and Crossfit.

In Spanish, Ciclovia means bike path. In Bogota, Colombia, where Ciclovia began, streets are closed every Sunday. Similar events are now held in more than 200 cities throughout the world.

The first New Brunswick Ciclovia was held in October 2013. Last year, more than 10,000 residents and visitors participated in Ciclovia. Two more Ciclovia events are scheduled for June 14 and October 4. View a promotional video of Ciclovia