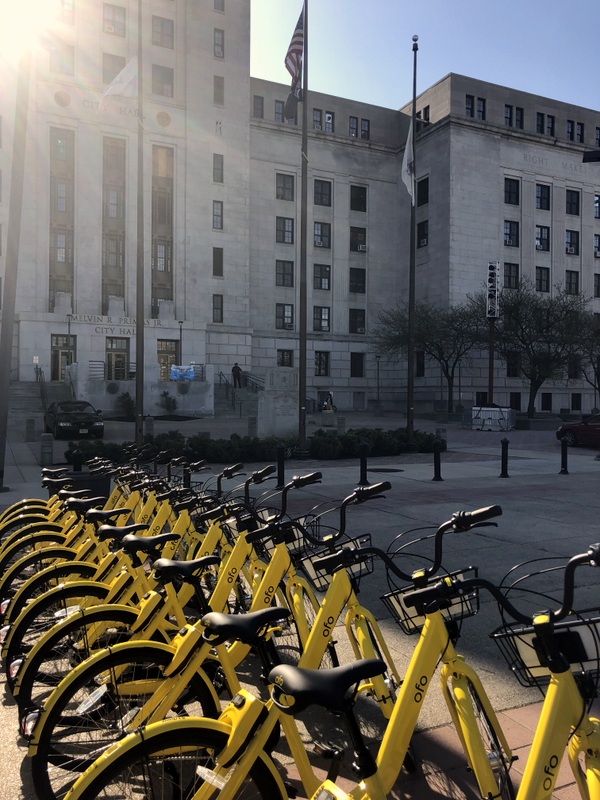 The decision by the Camden City Council to try out bike sharing for an four-month trial period generated a multitude of media coverage, both local and national, print and TV.

The bicycle service is provided by a company called “ofo” that introduced bike sharing to San Francisco and Beijing, among many other cities. According to ofo, some of its partner cities have seen short-distance car trips (under three miles) reduced by as much as 44 percent because residents opt to hop a bike instead.

All it takes is a Smartphone app—to find and unlock a bike—and $1.00 per hour for the ride.

Bike Share launched officially on May 2 with representatives from Cooper’s Ferry Partnership, the City of Camden, Camden County and Get Healthy Camden assembling at Roosevelt Plaza Park. “The Camden Bike Share will be an extremely affordable, convenient, and fun way for residents and visitors to get around and see all the phenomenal progress taking place in the city,” said Camden Mayor Frank Moran. “This summer, we want to provide an easy way to explore our beautifully rehabilitated parks, new restaurants, and bustling waterfront without the worry of parking.”

The Bike Share will encourage alternative modes of transportation in the city, especially along the Camden GreenWay and the Circuit Trails.

The service does not use parking docks; instead, customers find an available bike via their phone, enter a code provided by the app to unlock the bike and push a lever to lock the bike at the end of their trip, leaving the bike behind for the next rider. The bikes have GPS units, allowing customers – and the ofo operations team – to track their location. Users can ride anywhere within the City of Camden limits.

Next time you see a bright yellow bike in Camden, hop on and enjoy the ride.