Originally published in The Daily Journal 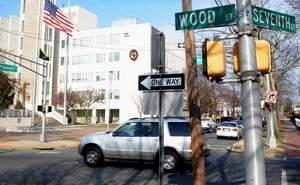 Traffic heads west on Wood Street near Vineland City Hall, where a bike lane will be established. / Staff photo/Cody Glenn

The city plans to paint bicycle lanes on two streets beginning this spring.

The bicycle lanes will be painted on Wood Street and Elmer Street — each a one way street, said Brian Myers, the city engineer.

“The project will probably be coming in the spring,” Myers said. Officials were finalizing the plans earlier this month. The cost of the project is not yet known.

The bike route would be a first for the city and would allow bicyclers their own lane in which to ride, Myers said.

The lanes would be established on Wood and Elmer streets between West Avenue and East Avenue. Parking would still be maintained on both sides of the street, Myers said.

Emma Lopez, the health educator with the city’s Health Department, said some of the painting is being paid for by a $4,000 grant from Robert Wood Johnson Foundation through the New Jersey Partnership for Healthy Kids.