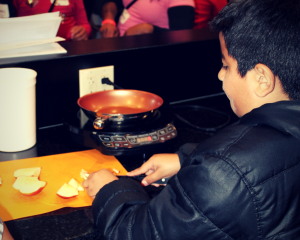 To most people, Joshua Pantoja Jr. appears to be an ordinary kid.  In his spare time, he plays basketball, soccer, baseball and crazy kickball. But that’s where ordinary ends and extraordinary begins.  At 10 years old, this creative, talented and funny fourth grader from Hamilton, NJ, is a gourmet cook and has been honing his culinary craft since about age 8.  As early as age 5, he began spending a lot of time in the kitchen with his grandmother watching and learning how to cook different recipes.  Over the years, she taught him how to measure, as well as combine various Latin seasonings and flavorings. He also found himself consumed with cooking shows but was afraid to touch the stove because of his small stature.

Joshua and his mother Magaly Pantoja were among the first group of families to attend the Frost Valley YMCA Healthy Family Retreat in November 2015. Located on more than 5,500 acres in the heart of the Catskill Mountains, the retreat was co-sponsored by the New Jersey Partnership for Healthy Kids.  During the weekend, Joshua learned how to make healthy apple turnovers and kale chips, which are now one of his favorite “go to” snacks. He also learned about container gardening.

According to his father Joshua Pantoja, Sr., “When he returned home from Frost Valley the first time, he wanted to show me how to prepare all of the recipes he learned, as well as how to eat healthy and grow things in a small space.”

Joshua was so inspired by the Frost Valley weekend, that he insisted his father join him for the second Healthy Family Retreat in April 2016. “It was a treat for me to go with him and observe what they were teaching,” said Joshua Sr.

In addition to a chicken coop in the back of his house, Joshua now has a garden where he has planted watermelon, jalapeño peppers, cucumbers, and tomatoes he received from Frost Valley.  Joshua also made a pact with his dad that he would read more books if his dad stopped drinking soda.  Both are fulfilling their end of the bargain.  Since returning from Frost Valley, Joshua has read seven books and his dad is now drinking water instead of soda.

The Frost Valley experience also motivated Joshua in other ways.  One day he was watching the Food Network’s Chopped Junior Show. He was so excited to see other kids cooking that he asked his dad if he thought he was good enough to be on the show.  His dad told him, “You can do anything you want.”

That started the ball rolling and his dad immediately contacted the Food Network about open auditions.  Although they had already interviewed nearly 5,000 kids, they asked him to send an audition videotape with Joshua preparing his favorite dish. Joshua quickly won the producers over when he prepared Piononos, a Puerto Rican lasagna-like tart that includes sweet plantain, layered with cheese, meat and scrambled eggs on top to fuse it together.  Once the producers saw the video, they immediately scheduled an in-person meeting with Joshua, who was ultimately chosen to be on the first Chopped Junior Show of 2016.

With only three weeks to prepare, Joshua’s whole life became kitchen…study…kitchen…study…kitchen…
study! Even though he didn’t win the ultimate prize of $10,000, Joshua made it to the second round before being eliminated.  “After I made the first round, I was okay,” said Joshua. “I just didn’t want to be the first one to be chopped.”  Joshua was more disappointed that he couldn’t take his baby sister, Gabriella to Disney World with the prize money. “My sister loves me so much and she has supported me every day of my life—even though I think she wanted a sister,” said Joshua.

He still chalks up Chopped Junior as one of the most memorable experiences he’s ever had. Within one day, the show received over 950,000 YouTube views—the most it’s ever had.

Since Chopped Junior aired, Joshua is often recognized when he is out and about. His friends and members of his church often ask him to cook meals for them.

When Joshua grows up, he wants to be a “Chemedian” (Chef and Comedian). And, he’s already thinking about his next venture which includes being a YouTuber. He also wants to cook for a U.S. President and/or a national dignitary. His favorite celebrity chefs are Emeril and Bobby Flay.

What advice would he give the average cook? “Keep trying—that’s what I did until I was better than the best!”