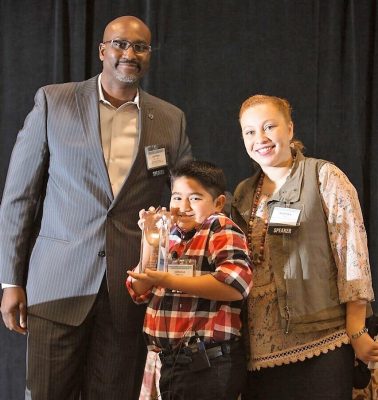 HAMILTON — New Jersey Partnership for Healthy Kids (NJPHK), a program of the Robert Wood Johnson Foundation, presented its “Heathy Kids Champion” award to 10-year-old Hamilton resident Joshua Pantoja, Jr. during the Building a Culture of Health in New Jersey: Advancing the Population Agenda Conference on November 30 at the Pines Manor in Edison.

The Healthy Kids Champion award is presented to outstanding leaders for their commitment and contributions in New Jersey. As the youngest recipient, the award acknowledges Pantoja’s commitment to helping his family and friends make healthier choices. Last year, Pantoja attended NJPHK’s Healthy Family Weekend Retreat at the YMCA Frost Valley where he participated in healthy cooking classes. The cooking class inspired Pantoja to help his family and friends make healthier choices, as well as served as the catalyst for him to become a contestant on the Food Network’s Chopped Junior program. Pantoja regularly cooks healthy meals for his family, friends and classmates. He also created a container garden where he planted watermelon, jalapeno peppers, cucumbers, and tomatoes.

“Joshua is an inspiration and embodies the mission of NJPHK to reduce childhood obesity by making the healthy choice the easy choice,” said Darrin Anderson, deputy director, NJPHK. “It is an honor to present this award to Joshua who, at such a young age, is already making such a positive impact on his family and overall community.”

Nearly one in three young people are either overweight or obese, placing them at increased risk for type 2 diabetes, heart disease and other serious health conditions.

Over the past five years, NJPHK and its community partners have made significant strides in implementing more than 200 environmental and policy changes to increase access to physical activity and healthy eating. These changes include: assisting with the development of school wellness policies, renovating playgrounds, installing bike lanes, partnering with more than 160 local corner stores to include healthier product offerings launching healthy farmer’s markets in combination with health screenings and hosting healthy family weekends for more than 100 families across the state.