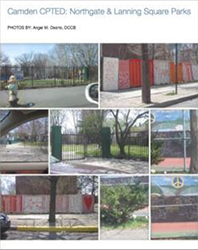 A grant from ShapingNJ to NJPHK-Camden has spurred community efforts to develop assessments about neighborhood parks so the City of Camden can create strategies for Crime Prevention Through Environmental Design (known as CPTED).

Valeria Galarza, NJPHK-Camden project manager, reports that more than 20 community members attended the first CPTED Community meeting in April, addressing neighborhoods on the north side of the city. A meeting for south side neighborhoods is planned for this summer.

CPTED is based on the belief that by working together, public officials, residents and environmental planners (architects, landscape designers) can increase safety and prevent crime in a community by building physical environments that influence human behavior in a positive way. CPTED focuses on four principles: natural access control, natural surveillance, territoriality and maintenance.

NJPHK-Camden, working with the Camden District Council Collaborative Board (DCCB), an independent community organization, developed a survey to query residents about the current physical conditions of local parks, collect their observations, and learn about opportunities to incorporate CPTED strategies into the parks. Community residents will be taking the survey door-to-door to spread information about CPTED, collect responses and ultimately target parks with the greatest potential.

“Our goal is to collect 1,000 completed surveys, 250 per police district,” says Galarza. The survey data will be combined with an earlier DCCB assessment to begin targeting parks and identifying techniques to make the parks safe community resources. To date, response has been positive, with more than 300 surveys completed.

Galarza reports that “another major takeaway from the meeting was the interest from the community to revisit a stewardship program for each park,” such as Friends of Northgate Park, where NJPHK-Camden and DCCB are active members. “We shared the benefits and commitment needed for a successful stewardship program. More formal discussions will be held with the City of Camden and interested neighborhoods ready to move forward with this component.”