An Inspirational Kick Off to the Live Healthy Vineland Summit 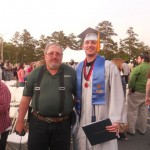 Four years ago, Robert Dickinson smoked too much, ate too much and rarely exercised. In his words, he’d been a “rolly polly” kid whose weight continued to climb in his adult years. He managed to kick cigarettes on Valentine’s Day in 2011—his first day without a cigarette since he was 15. Two months later, his wife was diagnosed with terminal lung cancer and she would die that November. Caring for his wife while holding down a demanding job, Dickinson had no time to think about what he was eating—he grabbed fast food or opened a can, whatever was easiest and most accessible. His weight climbed to 286 pounds.

Last year, Dickinson was promoted to Health Officer for the Vineland Department of Health. The new position prompted him to take stock. He wanted to set an example for the community, but thought, “Who would take an obese health officer preaching obesity prevention seriously?” 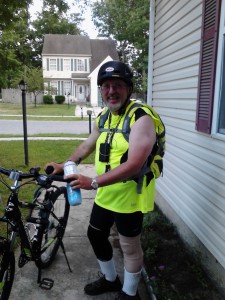 He enrolled in the Cumberland Cape Atlantic YMCA Diabetes Prevention Program, which is offered to Vineland residents through the Live Healthy Vineland initiative. Dickinson learned to count calories and fat grams and discovered the synergistic effect of combining physical activity while reducing caloric and fat intake. He unearthed his bicycle and took his first ride to fitness—a 1¼ mile trip to the produce store.

Today he bikes 75 to 150 miles a week and works out at the YMCA. He’s lost 95 pounds and 10 inches off his waist. He eats fresh fruits and vegetables and chooses fat free or reduced fat foods whenever possible. He views himself as a changed man.

Dickinson shared his story at the Live Healthy Vineland Summit on September 23 at Cumberland County College. His success was the inspiring start of the 2½ hour lunch time session. Participants included Cumberland County educators and social service and health care providers who shared their thoughts on how to create a culture of health. Their feedback will inform a strategic plan for sustaining health and wellness in Cumberland County. 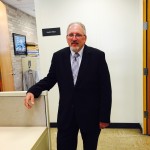 Throughout his career, Robert Dickinson focused on the big picture of community health in terms of preventing the spread of disease and providing a healthy environment for community residents. Five years ago, he gave little thought to how personal lifestyle choices affect the health of the community at-large. Today he has a totally different view.

At the Summit, Dickinson asked attendees to advocate for Live Healthy Vineland and motivate others to make healthy life style choices and changes that will improve their individual health, keep them healthy and delay the onset of chronic disease. “There is no better gift you can give and there is nothing more rewarding than to see the positive changes in their lives,” Dickinson said.